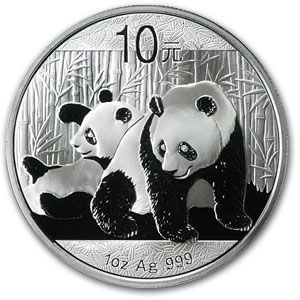 If you are interested in collecting silver bullion coins, then the Chinese Silver Panda is a great choice that you should consider adding to your collection. As the name suggests they are issued by the People’s Republic of China and feature the emblem of a panda.

The Chinese Silver Panda coins were first minted in 1983, and have been minted every year since, apart from 1986. Initially, for the first three years, these coins were only available as Proof quality. This means they were special early samples, and were not intended for general circulation, making them ideal for collectors.

Over the years the Silver Chinese Panda coins have been produced in a range of mints around the country, including those in Shenzhen, Shanghai and Shenyang. However, these coins do not bear mintmarks to identify their source, unlike coins minted in the US.

The good news for those wishing to diversify their retirement portfolio is that these silver Chinese Panda coins are IRA eligible, giving you another way to help save for your future.

During the first three years of production of the Chinese Silver Panda coins, when the coins were Proof quality, only 10,000 were minted each year. From 1989 onwards the coins were produced in both the uncirculated bulk version, and the Proof version.

When it comes to buying the Chinese Silver Pandas, there are many versions that are easy to get hold of. Online precious metals dealer Apmex.com has the 1 oz. coins from 2013 and earlier, Proof Silver Pandas, as well as the 5 oz., the 10 oz., the kilo and the ½ oz. coins.

Single 2013 1 oz. Silver Pandas, sold in a capsule, sell for ~$38, while the same coin from 2009 can fetch almost three times the price. Proof Chinese Silver Panda coins are harder to get hold of and run into the 100s and 1000s of dollar price range.

There are a few different options available, in terms of pre-packaged quantities, when it comes to buying these coins.  The largest on offer are the Chinese Silver Panda 600 coin sealed Monster Boxes, which contain a total of 600 ounces of silver. This is a great way to buy in bulk, and as the coins in this monster box are eligible for inclusion in IRA precious metal accounts, it is a convenient way to plan for the future.

The Pandas are also available in individual packages where they come in a capsule, which is a sealed, hard plastic holder into which the coin is placed once it has been graded. These capsulated coins come with an assay card that confirms the details of the coin and displays its serial number.

There are also individual coins available with the Early Releases label, which guarantees they were received by the Numismatic Guarantee Corporation (NGC) within the first 30 days of minting.

These coins are very detailed, making them popular with collectors who appreciate good design. Their quality aesthetics make them widely attractive to collectors not just based in China, but around the world.

The observe of the coin features a depiction of the Temple of Heaven, which is a group of religious buildings located in Beijing, the capital of China.  There are Chinese characters at the top of the coin which mean ‘People’s Republic of China’. The year of issue is then displayed at the bottom of the coin. This is where the details of any special issue or theme will be displayed if the coin is a commemorative issue.

On the reverse of the coin there is the image of a panda. Every issue of the coin features a different picture, apart from 2001 and 2002 which shared the same design.  This is the only bullion coin to feature a new design each year.  This can make investing in these coins tricky, as some year’s versions increase significantly in price over time, while coins from other years do not.

During the almost three decades of production, the Chinese Silver Panda coin has been minted in a number of different varieties. These include uncirculated coins and Proof coins, gold plated and gold gilded coins, an observed that is coloured as well as the use of different privy marks to identify the commemoration being celebrated.