The grade of a coin is a value selected from a rating system created by those who work with coins, experts known as numismatists. The grade of a coin conveys its condition, and when grading is carried out, five main aspects of the coin are considered. These five elements are: the strike of the coin, the preservation of the surface, its luster, its coloration, and its eye appeal.

The two main coin grading agencies in operation today are the Professional Coin Grading Service (PCGS) and the Numismatic Guaranty Corporation (NGC). ANACS and ICG are two smaller grading agencies who are less popular in the market. 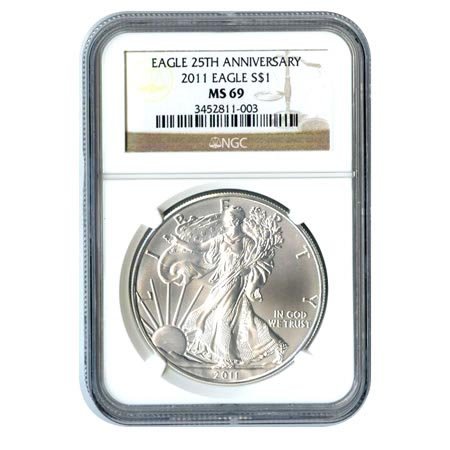 An American Silver Eagle, Graded MS69 by the NGC

Although using the same grading system, these third party graders were found to not agree on the grades of the same coins, after an investigation by a coin magazine in 2003. Due to these differences of opinion by the graders, it is recommended that anyone about to invest any significant amounts on coins, seek the advice of an independent expert.

Initially there were just three terms available to grade a coin. These were: good, fine and uncirculated. However, it wasn’t long before this small selection of grades was deemed insufficient. In 1948 the Sheldon grading system was introduced, adding more subtle grading points to help distinguish the condition of the coins further.

The Sheldon Coin Grading Scale is still in use today. Under this system, coins are assigned a number score between 1 and 70, with 1 being poor, and 70 representing a coin in perfect condition. The scale is divided into categories of quality and type of coin including proof which covers points 60 to 70.  This is a great way to set apart two coins which are both proof but of different condition. The terms used in the system to grade a coin are:

While the above system is widely used in the US, some countries within Europe have their own grading systems. While they grade on similar qualities of the coin, most countries use a lettering system instead of a number to identify the quality of the coins.

Within the standard grading systems there are also distinctions between available grades. One example of this applies to proof coins. One feature of proofs is their shiny, reflective surface. The depth of mirrors that these reflective surfaces have has been defined and graded to give those buying and selling these coins to distinguish them from one another, in terms of grading. These terms that refer to the reflectiveness of proof coins include Cameo, Deep Cameo and Ultra Cameo.

How Coins are Graded

The four main coin grading agencies listed above use a similar process for grading coins sent to them. Initially the coins are independently assessed by, usually, three graders. After that a finalizer will give the coin a grade based on the recommendations of the initial assessors.

After that the coin is slabbed, or placed in a secure coin holder, with the grade enclosed. The slabbing process is in place to prevent the grade being altered or changed once it has been returned to the owner. However, counterfeit holders have been in circulation in the past, making it difficult to accurately verify the grade of coins on sale.