Some events, people or issues are deemed important enough to merit a commemorative coin being produced in their honor. While this practice has increased in popularity since the 1960s, the existence of commemorative coins dates back much further.

Usually when a commemorative coin is produced, it is done so with the intention of it being a collector’s item, rather than being circulated as currency, despite many of these coins being legal tender. Due to their intrinsic value nearly always being higher than their face value, it is very unlikely to find such a coin in circulation. These coins are known as ‘non-circulating legal tender’.

However, this is not always the case and some commemorative coins fit into the subcategory of ‘regular issue coinage’.  This means that despite their commemorative design, they are used as normal currency and widely circulated. Coins of this type usually carry the same design for many years and are minted in large quantities. This gives them no numismatic, or collectable, value.

These commemorative coins are being issued on a yearly basis, starting in 2010 and scheduled to end in 2021. Their face value is one quarter of a dollar, and they are being minted to commemorate and honor a national site from each state and the five territories of the US. 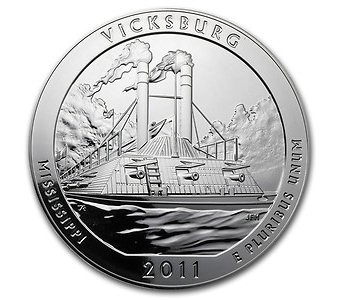 An America the Beautiful Coin

To fit in the 56 coins, one for each state and the five territories, in 11 years, five different designs are issued each year.  All coins share the same obverse, with the individual designs displayed on the reverse. All of the ATB coins will be minted using .999 fine silver, weighing 5 troy ounces, and made available for sale to the public.

These are special commemorative versions of the Canadian Silver Maple leaf bullion coins. Six different coins were minted for this series over three years, from 2011 to 2013. 1,000,000 instances of each coin were minted.

While the face value of these 1 ounce coins is five Canadian dollars, they sell for a much higher price than that due to their pure silver content. For example, the silver Canadian Grizzly coin from 2011 is on sale for around $50, while the 2012 silver Canadian Cougar coin is available for around $35. These are both available graded as brilliant uncirculated.

This coin was minted in 2005 and available as either a proof or an uncirculated coin, with 600,000 units being minted in total. This was the first coin minted to commemorate any branch of the military in the US. The reverse of the coin features the emblem of the Marine Corps and its motto, as well as the face value of the coin written in words. The iconic image of the raising of the flag on Iwo Jima is featured on the obverse side.  These commemorative coins contain 90% silver and weigh 26.73 grams.