Up until 1965 many coins made by the US Mint for use as currency consisted of 90% silver. However, as the price of silver increased in value, the decision was made to replace the use of precious metals with cheaper materials, such as nickel.

However, one coin that continued to contain silver was the Kennedy Half-Dollar. Initially, on its introduction in 1964, this coin consisted of 90% silver, but after one year, this amount was reduced to just 40%.  These 40% silver Kennedy Half-Dollars were minted from 1965 to 1970, before silver was removed entirely from this coin. 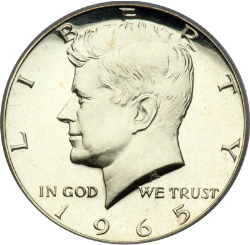 Any of the 40% silver Kennedy Half-Dollars that were in circulation are considered junk silver. This is in reference to their value as a precious metal, rather than their value as a collectible coin. The coins that are not junk silver are mainly graded as ‘brilliant uncirculated’ or ‘proofs’.

However, it is worth pointing out that there was also an Eisenhower dollar, sometimes referred to as an ‘Ike’, which contained 40% silver. This coin was created as a special collector’s item, and was produced at the San Francisco Mint from 1971 and 1976. These coins were uncirculated or proof rather than being minted as general currency.

While there were just two 40% silver coins minted, there are different options of availability for each. Most of the 40% Kennedy Half-Dollars are sold as junk silver and are widely available from online precious metal dealers such as JMBullion.com. The junk silver versions are available in a number of different quantities and bag sizes including the following:

There is also a $500 Face Value Bag available which has the same specification as the other two bags but on a different scale, with a price of around $4,300. For smaller purchases these is a $10 Face Value roll of 20 coins and a $1 Face Value pack of two coins.

While the above coins are junk silver, and have been in circulation at some point, there are also other grades of the 40% silver Kennedy Half-Dollar coins available:

Apart from the above Kennedy coins, there is also the Eisenhower ‘Ike’ $1 40% silver coins on the market:

As you can see there were not as many 40% silver coins minted as the 90% coins. However, there are still a few options to consider of the two types of coin that were produced with this silver content level.